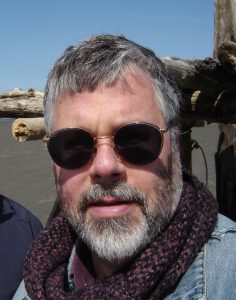 As part of celebrating Foglifter’s recent Pushcart nominees, we interviewed the writers! First up is Michael Upchurch.

Foglifter: What would you say are your most prominent influences on your writing, currently?

Michael Upchurch: The short stories of J.G. Ballard, Rachel Ingalls and Steven Millhauser are looming large in what I’m up to lately. All three authors have a knack for taking hum-drum premises and spinning them into fantastical and often taboo-shattering extravaganzas. I like their humor, I like their darkness, I like their unexpected turns.

F: What are you currently reading?

MU: After reading Maya Jasanoff’s new book “The Dawn Watch: Joseph Conrad in a Global World” for a book review, I was prompted to fill in one of my Conrad gaps. I’m about halfway through his 1915 novel, “Victory,” and so far I’m getting a huge kick out of it. It plays like some Malay Archipelago-set hybrid of “The Maltese Falcon” and “Beat the Devil.” There’s even a surprising (to me) gay element to it. After making sure he’ll have no female company to spoil the manly atmosphere around him, a silky gangster who gives his name as “plain Mr. Jones” takes up residence in a Surabaya hotel and insists his personal secretary, Mr. Ricardo, “must have the room next to mine.” The unscrupulous hotelier, eager to help this criminal duo find their next target, steers them toward a wandering Swede named Axel Heyst (the main character of the book) who may have some riches stashed away on the isolated island where he lives, a 50-hour boat-ride northeast of Surabaya. When Mr. Ricardo grumbles, “Steer northeast for fifty hours, eh? That’s not much of a sailing direction,” the hotelier asks him, “What do you think of a pillar of smoke by day and a loom of fire at night? There’s a volcano in full blast near that island—enough to guide almost a blind man. What more do you want? An active volcano to steer by!”
Fun stuff.

F: Are you working on a project, currently?

F: What do you believe is the role of the poet/writer in this cultural climate?

MU: My favorite writers – too many and too various to name – often hold up a mirror to the realities they inhabit. I like it best when that mirror is a distorting mirror. There’s something in warped reflections, I find, that helps you see the realities being reflected for what they are.

F: Where do you get your ideas for your writing?

MU: Phrases and sentences pop spontaneously into my head, as melodies do for composers and songwriters. I keep a list of them and, when I have time, try to build a story around them. “Jacuzzi” is a good example. The following line appeared in my brain: “Whenever we had a ‘baby,’ it always came as a surprise.” The fun was taking that thought and seeing where it could go. I also like to set perverse goals for myself. In “Jacuzzi” I wanted to write the gayest possible story about straight men – because they are all technically straight, despite their strenuous efforts in the Jacuzzi together. It may help to know I’m a big admirer of Henry Green’s “Concluding,” one of the most inconclusive novels ever written.

F: What childhood memory is the most vivid, that you can recall?

F: What is the strangest thing you’ve ever seen?

MU: After sleeping rough under a gorse bush on a clifftop in Devon in the summer of 1972 (and getting freaked out in the middle of the night by a sound I eventually identified as sheep coughing), I woke to a cow galloping past me and leaping straight off the cliff. I peered over for a look at the ocean breakers a couple of hundred feet below, but I couldn’t get any notion of where it had gone.

Michael Upchurch is novelist, literary journalist and arts writer whose novels include “Air,” “The Flame Forest” and “Passive Intruder.” His short fiction has appeared in Conjunctions, Moss, Golden Handcuffs Review and The Seattle Review. He lives in Seattle with his husband, film critic John Hartl.