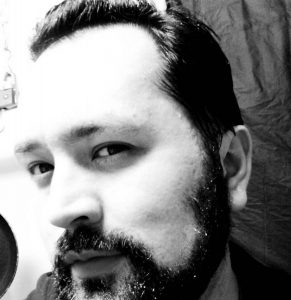 Foglifter: What are you currently reading?

Baruch Porras-Hernandez: Iceman. He just came out as a Gay man, and gay comic book writer Sina Grace is writing the book. Most people don’t realize how important this is, after over 50 years of X-Men stories comforting, inspiring, and strengthening gay men, one of their original members has finally come out.

F: Are you working on a project, currently? Describe it.

B: I am collaborating with MACLA (Movimiento de Arte y Cultura Latino Americana.) on what will be a multimedia project that will include short stories, comic books, visual art, social media, and performance focusing on queer Latinx superheroes as the main characters of their own, not sidekicks.

I have a manuscript I would like to get published currently titled “Dick World”.

Another one is currently titled “Fieras” which is a collection of short stories or vignettes about animals, and an immigrant family, whose son slowly turns into a beast. The family finds out they come from a place in Mexico where a man turned into a monster and terrorized a pueblo near a forest for 12 years.

I have a book of poetry that keeps getting onto finalist lists, but has not been published yet. Currently titled “I Miss You Delicate”

F: Do you have a particular writing ritual or habit? What is it?

B: Crying half an hour before a deadline, usually eating, usually angry.

F: What do you believe is the role of the poet/writer in this cultural climate?

I am too lazy to run or hide, and I don’t like being stuck in a room with too many people. I’m just not into crowds, or sharing, so….so I’m probably just going to die in the town square for being gay.
But I will take down a guy or two, with my teeth. I have no upper body strength, but when they come for me, one of them will get close, and I will bite them, deep in the neck, and break skin, and rip out parts of the throat. Then they will arrest me, but before I am executed, will dig my thumbs deep into the eye sockets of at least one Nazi skull.

F: Why do you write?

B: Working on my Neflix script. I also perform a lot, as a solo performer, or storyteller, or do stand up, or actor. I also run Donde Esta Mi Gente? a Latinx performance series.

F: Most influential writers in your life? Why?

B: Poets in the land of the dead; When I was in high school I really liked Paul Verlaine. Octavio Paz. I was obsessed with “Demain des L’aube” (Tomorrow at Dawn) and other poems by Victor Hugo, when I was 17. I never got too into Artur Rimbaud (eh I just didnt get it), but I did love this poem very very much when I was a teenager (I know, gaaaaaay!) The poem is titled “Le Dormeur du Val”.

Writers that are alive;
Eduardo C. Corral because “Slow Lightning.”
Danez Smith because everything he writes. If you haven’t, you need to read this now: From “summer somewhere” https://www.poetryfoundation.org/poetrymagazine/poems/58645/from-summer-somewhere
Natalie Diaz because “My Brother Was an Aztec”!
Shanny Jean Maney.”I Love Science” still makes me cry.
Marilynne Robinson. Read “Gilead” I could read it again and again.

F: If someone told you that they want to be a writer, what advice would you give them?

B: This is advice only for lower class lower income marginalized young writers. Prepare to deal with the anger of having to compete with privileged writers who come from money, or their parents pay their bills, that will have all the time in the world to work on their craft while you juggle all the jobs to just be able to survive and write for one hour a day if you are not exhausted. Don’t let the anger get in your way. The rich kids may excel in their writing careers faster than you, but when you get your small victories, when you get that thing published or you get that grant you wanted, trust me, it is going to feel 100 times better than any accomplishments those rich brats ever get in their pretty pampered writing lives. Or, marry money. Then, cheat on them with someone you love.

F: Share with us a writer(s) that we may not have heard of that would be worth hearing of.

F: What does queer mean to you?

B: I use the word queer as a unifier. Queer means all of us in the spectrum away from heterosexuals (keep em out! FUERA!) queer means all the lesbos homos, cocksuckers, muffdivers, perverts, genderqueers, nonbinary, bisexuals, transfolks, draggos, faggos, and queerkinksters.
It may have a new meaning tomorrow. I’m sure the new queer babies will one day declare the word queer old and obsolete, and they will have a new word for old gays like me. The word will probably confuse and anger me, and I will stop coming to literary events. I’ll braid my white hair, wear mumus, and just live in the forest cause my brain will be too old to accept the brain chip that will plug me into the Google-Singularity-AmazonPrime-O-sphere.

F: What is on your desk right now?

B: A photo of my partner licking a knife. A hair dryer. Drawings of Octopuses. Drawings of Penises. A bag of sex toys I won at a poetry contest. A pile of printed out poems. Gummy Bears. And about ten empty Pamplemousse LaCroix cans.

F: What superpower would you want, and why?

B: Mass teleportation. Teleport hundreds of people out of war zones, out of natural disaster situations and into safety. Teleport all queers out of countries where they are in danger. Teleport everyone but Trump supporters to Kepler-452b when the earth dies and the sun explodes. I want to be a Floating Robot Head with lasers and wifi, that can fly infinitely into space.

F: Who is someone you idolize from outside the writing world, and why?

B: Rebecca Sugar (animator, song writer). If you don’t know of Steven Universe, who the heck even are you, and why do you exist?
The creator of Moral Orel, but he also kinda scares me, so…
Lizzo. %100 That Bitch!
My mother.

F: What childhood memory is the most vivid, that you can recall?

B: My first day of kindergarten, I decided I didn’t like it. School was not a fun place for kids in Mexico in the 80s; teachers were feared tyrants. I told the teachers they were boring and oppressive and that I was leaving. They said I couldn’t leave. I said “Watch me” and left. I was really fast. They thought I was bluffing, and by the time two teachers and a yard duty started running after me across the courtyard, I had already made it to the gate, which was not made kid proof for some reason, I was able to squeeze my head through the bars to freedom. I walked through the city and all the way home. I felt so free, and alive. I swore I would never let anything cage me in like that ever again! My mother was half furious, but also half shocked and impressed that at age 5 I was able to escape. To my dismay I was informed that I had to go back to school, for the next 12 to 17 years.

F: What is the strangest thing you’ve ever seen?

B: 4am I couldn’t sleep, so I walked to Grace Cathedral to sit near the Chartres labyrinth they have outside to think and drink whiskey. I lived in the Tender Nob on Sutter. When I got up there, instead of it being empty, there was a white couple, who were quietly contact-dancing on the labyrinth. A homeless man rose out of the shadows and growled at them. He then approached them like a dog, gibbering and mumbling, and tried to bite the woman. Instead of running in fear, the couple just contact-dance improv-ed with the homeless man, who was pouncing and growling and was in a drugged state, and barking like a dog. At one point they were all on all fours, crawling like dogs. The homeless man kept trying to bite the woman and she just kept dodging and rolling away, or would just contact-dance with the homeless man. At one point she did a flip over him. If she ever seemed in real trouble her partner would get in between them, and do more contact-dancing. I just sat silently, watching, drinking my whiskey. Finally, the homeless guy stood up and said, “Will you fucks go home! I’m trying to sleep!!” The couple bowed and walked away.

F: Name someone you know that you admire. Why?

B: Marga Gomez. Hero, community leader, theatre maker, writer, performer, actor, comedian. She does it all and kicks ass doing it. She makes San Francisco worth it. New San Francisco does not deserve her, GO SEE HER NEXT SHOW!

Baruch Porras Hernandez has work in Assaracus, Divining Divas, Aim for the Head, online with The Tusk, Drunk in a Midnight Choir, and several other anthologies. He is a Lambda Literary Fellow, the voice of SHIPWRECK SF, was born in Mexico, and lives in San Francisco.