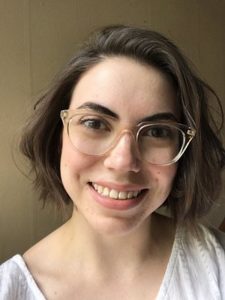 Foglifter : What are you currently reading?

F : Are you working on a project, currently? Describe it.

K : I’m currently working (and working and working) on a novel, but my back pocket project is where I’m feeling the most inspired right now. I’ve been writing short vignettes about a set of characters for almost ten years now, so I’m working on scraping those together into something resembling a manuscript. Always trying to churn out short stories, as they are my one true love.

F : Do you have a particular writing ritual or habit? What is it?

K : I’ve spent so much time trying to come up with my perfect ritual, and I’ve recently just decided to mix things up every time. Because if you can’t keep things interesting for yourself, what’s the point, you know? But, usually, cramping a bunch of hours in on the weekend, in a coffee bar or this one really comfy chair in my living room.

F : When you aren’t writing, what are you doing?

K : I cook a lot of food and watch a lot of television. I’m also a contemporary hand embroidery artist, so right now I’m filling out pieces for display in the local coffee shop in February.

F : Where do you draw inspiration, beyond literature?

K : I studied film for a little while, so I’m always watching movies and shows, mostly for ideas on form. I saw a documentary about the director of Drive and Only God Forgives where the entire plot of a film was up on the wall with little index cards, and I stole that process for big projects. Also, all Southern writers should watch Rectify. I also go to lots of art museums. I like painting and sculpture in particular. Lots of my stories start with images or moments and I’m always looking for new ones.

F : If someone told you that they want to be a writer, what advice would you give them?

K : I guess people always say this, but write and read a lot, all the time. I was so afraid of copying writers I knew because nothing felt original, but in the end I think pretending to be your favorite great writer is the best way to trick yourself into thinking you’re a great writer too. By the end of it, somehow, your own style always comes through. Also, people tell you to write what you know, and that is the worst advice I’ve ever heard.

F : Share with us a writer(s) that we may not have heard of that would be worth hearing of.

K : Cynan Jones is a Welsh writer who Coffee House has been publishing for a while. I highly recommend his novel in weird pieces The Long Dry, especially to people who like Southern minimalism or grit lit. Stark, lyric language, and no one is doing the kinds of things he’s doing with form. He’s been a huge inspiration for me to try different things lately.

Kate Arden McMullen received her MFA in fiction from the University of North Carolina at Wilmington. A North Carolina native, she grew up in Greensboro and Cullowhee. Her work has appeared in Lady Parts Zine and Paper Darts, and is forthcoming from The Boiler. Her short story chapbook “The Girls of Indigo Flats and Other Stories” was the 2015 recipient of the Colbert Chapbook Award. She lives in Spartanburg, SC and is the assistant director of Hub City Press.