Reviewer’s note: this review was originally written for The East Bay Review April 16, 2018.

In his A. Poulin, Jr. Poetry Prize–winning debut, Marcelo Hernandez Castillo conjures a lush, breathing landscape that permeates and encompasses the self, contrasting the sincerity of the physical against society’s punitive, artificial hegemony (including militarized national borders, compulsory heterosexuality, and strictures of masculinity). Castillo’s most effective tool is imagistic surrealism, which he uses to collapse the space within metaphors and reveal a rich, unexpected, and deeply sincere world.

Castillo’s surrealism presses up against the edges of reality, giving rise to breathtaking lyricism as well as skillful rhetorical leaps, as in “Immigration Interview with Don Francisco,” where the speaker wonders, “Perhaps the butterflies are mute because / no one would believe their terrible stories.” That image stops the reader short and unlatches a door to an alternate reality where immigrants are butterflies, and those butterflies can speak but choose not to since they won’t be believed.

Surrealism is also used to transform a cultural reality that leaves little space for the speaker. The unsettling gesture at the opening of “Wetback”—”After the first boy called me a wetback / I opened his mouth and fed him a spoonful of honey”—is somehow the most fitting response to the violence of a slur. Later in the poem, the speaker asserts, “Let my bare back remind him of every river he’s swam in.” Surrealism transmutes this trauma and makes space for the speaker to respond with gentleness and intimacy.

Such deft surrealism also allows for greater, more radical sincerity in poems like “Bi-Glyph,” where the speaker asserts, “We were always reaching / into each other looking for something / we didn’t know we had lost.” In less skillful hands, that sentiment would be expected, but here, a refreshingly unreal physicality grounds us in the moment. A dreamlike sincerity leads to moments like this one in “Origin of Prayer and Eden”: “We hid paper hearts in a box with all of winter’s / wings beating inside.” That’s another remarkably physical image—conjuring the wild flapping of trapped birds—and one that conveys both the hope and fragility of young love.

Castillo’s expansive surrealist gaze extends even to the dead, illuminating the uncanny dimensions of grief—the funhouse impossibility of a loved one being absent from the world, of feeling them close by and simultaneously knowing they couldn’t be further away. In “Dear Ramon,” “The glint of a tooth / nestled in ash was the single / brightest thing in that field.” Just as surrealism allows Castillo to remake moments of trauma, that same surreal eye remakes death and demonstrates how it seeps into life, blurring those two categories into meaninglessness.

Castillo’s voice is equally expansive in poems of family and sexuality, collapsing the boundaries between speaker and family, self and other. This dreamlike compression results in moments like this in “First Gesture in Reverse,” “The brown boy / waving the flag / of his father. / The brown boy / kissing the floor back,” where child, father, and flag form a shifting constellation of relation/disconnection and belonging/separation.

At times, the voice turns incantatory, especially when addressing queer intimacy in poems like “Pulling the Moon,” where the speaker asserts, “I’ve never made love to a man but I imagine. / I imagine pulling the moon. / I imagine pulling the moon out of his brow.” As in other instances of surrealism, the physicality is what makes this moment so effective—hearkening back to how unreal and magical sex can seem, especially before it’s experienced.

It’s a testament to Castillo’s craft that his words can take the reader beyond words to a purely physical place where “The edges of your body / touch everything / that isn’t your body” (“Rituals of Healing”). In these pages, the body becomes a powerful testament to resilience and individuality, allowing for a deeper connection than words can provide. This expansive physicality illuminates the foolishness inherent to the very conception of a “border” and gives access to a sincerity that speaks past societal categories to the ineffable beings that those categories can never hope to contain. 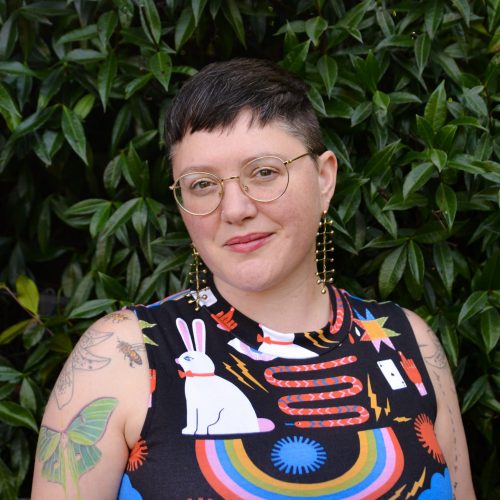 Luiza Flynn-Goodlett (she/her) is the author of four chapbooks, most recently Twice Shy, forthcoming from Nomadic Press. In 2019, she was a finalist for the National Poetry Series and the New Issues Poetry Prize. Her poetry can be found in Third Coast, Pleiades, The Journal, The Common, and elsewhere. Learn more at luizaflynngoodlett.com

Foglifter celebrated its launch of its latest issu

Autumn is for queer artists only.

Reading my contributors copies of @foglifterpress 💐

I’ve been working on the letter series included since 2014!! When I was cold & lonely my first winter in pgh ❄️😞