Kiss of the Spider Woman by Manuel Puig 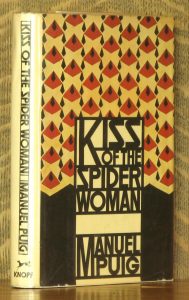 “I feel the need to tell stories to understand myself,” Molina explains of their constant need for escapism from the cell they share with Valentin by telling movie plots, ones that have fantastical plots and the promise of love. As one of my favorite novels, “Kiss of the Spider Woman” is my ideal choice for the queer syllabus. The novel had the English translation started before the original was published in Buenos Aires, due to it being deemed unfit to be consumed by the public because of its political intentions. Puig wished to bring an objective view of homosexuality and combat traditional views through factual footnotes on the psychoanalytic theory of homosexuality. The novel is an experimental force, as it lacks a traditional narrative voice and the dialogue never indicates the speaker, blurring the lines between Molina and Valentin and the binaries they inhabit.

What draws me back to this novel every time is how it plays with the binaries of identity, as each character seems to shift their identity and inhabit spaces they seem to be strongly against, such as when Molina helps the revolutionaries, even though they would rather not be involved at all. Molina’s dual identity as both a self-proclaimed gay man and a woman demonstrates their fluidity in both gender and sexuality as they inhabit different binaries in reality and in the articulation their fantasies. As Puig constantly deconstructs gender roles, political positions, and even realist or idealist positions, he creates a dialectic on the deconstruction of fixed binary ideological systems by giving marginalized groups a platform to enter the dialogue.

When I first read this book, I was beginning to question binary ways of thinking and how they restricted me in terms of my own identity. Then I read, “And what’s so bad about being soft like a woman? Why is it men or whoever, some poor bastard, some queen, can’t be sensitive too, if he’s got a mind to,” and I began to realize that my idea of masculinity did not have to be so divorced from that of femininity. This novel is on my queer syllabus not only because of its historical and revolutionary significance, but also because of its ability to shift perspective and focal point in several directions like an experimental film.

Charlie (they/them pronouns) is a tall artist that writes short poems to compensate. They are published in Transfer magazine and are working to get to the point where lines from their work are tattooed out of context. They currently work as an assistant poetry editor for Foglifter journal and a deputy editor for MARY.