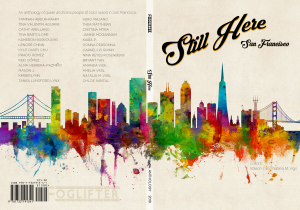 Foglifter Press is proud to announce our collaboration with Still Here—a performance and cultural preservation project started in 2012—by publishing an anthology of non-fiction writing from LGBTQIA2S+ artists of color raised in San Francisco. This work comes at a pivotal point in the lives queer/trans people of color facing gentrification and survival in San Francisco’s ever-changing social and political landscape, exploring issues issues like queerness, coming out, AIDS/HIV, loss, intergenerational memory, legacy, ancestors, and more. We put upon this anthology as a way to celebrate the experiences of queer/trans authors and artists of this city, and Foglifter Press hopes it will become part of the repository for future queer generations.

For Still Here cover we chose Michael Tompsett’s image because its design almost invokes nostalgia—the colors, tone and a time when the Pyramid was the tallest, most iconic building—while at the same time celebrating the creativity and playfulness that still exists. The image suggests that cities never stay the same, but it doesn’t mean we can’t yearn for a bit of history.

You can preorder the book HERE.

Following is the press statement from Still Here:

Queer and trans people of color raised in San Francisco tell their stories in a first-of-its kind non-fiction anthology.

Now, in its 7th year, Still Here will publish a book of nonfiction writing in partnership with Foglifter Press. “We believe that as storytellers, poets, multimedia artists, singers, and dancers, we can contribute profound re-understanding of time and place,” says Still Here Artistic Director Natalia Vigil. “We believe it is critical to voice our complex experiences as people of color with strong San Francisco roots and we understand that we have made profound contributions to San Francisco.”

“Through this anthology we claim our visibility as queer/trans people of color raised in San Francisco,” says Vigil. “We exist. We are visible. We emerge. We own our stories. We tell them in our own voices. And, as always, we survive.”

Still Here San Francisco: an Anthology of Queer and Trans People Raised in San Francisco will launch during the Queer Arts Festival on June 22nd, 2019. Celebrate with us on that night with readings from the anthology, performances, food, drink, and music by LA FEMME PAPI.