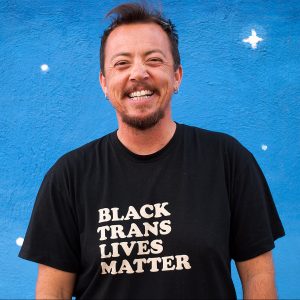 As part of celebrating Foglifter’s recent Pushcart nominees, we interviewed the writers! Second up is TC Tolbert, published in Volume 4 Issue 2!

In the last week I’ve read: even this page is white by Vivek Shraya, Negative of a Photo of a Fire by Trevor Ketner, Some Planet by Jamie Mortara. I’m looking forward to reading Hull by Xandra Phillips, As Burning Leaves by Gabriel Jesiolowski, and Slingshot by Cyrée Jarelle Johnson in the next week or so!

I am but I’m a bit superstitious about describing it. Mostly because I find that describing it before or while I’m doing it saps the creative energy from it—talking about it rather than doing it is this addictive thing where I can create a whole conceptual world and then that directs what I sit down to write rather than allowing me to be directed by it—I don’t want to miss the mystery by explaining it before it’s been made. Maybe it’s most honest to say that my project is to be curious when I’m scared or bored or insecure or on fire.

Sit my ass down and write. Sometimes I’m more regular about it than others. The big thing is putting down my damn phone and getting off email/social media.

I repeat Susan Sontag’s wisdom. In her Nadine Gordimer Lecture, she says writers should love words, agonize over sentences. And pay attention to the world.

To not just write but to choose the unexpected shifts and reaches of poeming in our relationships, activism, pedagogy, politics, economy, etc. To experiment with the line breaks of living—to find the connections between what is disparate—to interrupt whatever is trying to make the living become dead.

Reading. Teaching. Learning. Figuring out how to flood Tucson with the voices of queer, non-binary, and trans poets. Walking my dogs. Joking around with my love. Talking to friends on the phone (I totally still talk to people on the phone). Wandering in both internal and external wilderness. Trying to dismantle my relationships to white supremacy and ableism. Falling in love with the world.

TC Tolbert identifies as a trans and genderqueer feminist, collaborator, mover, and poet. And, s/he’s a human in love with humans doing human things. S/he is Tucson’s Poet Laureate and author of Gephyromania (Ahsahta Press 2014), 4 chapbooks, and co-editor of Troubling the Line: Trans and Genderqueer Poetry and Poetics (Nightboat Books 2013). www.tctolbert.com

Another AWAY MESSAGE reading is coming up with contributor @travisclau! ✨