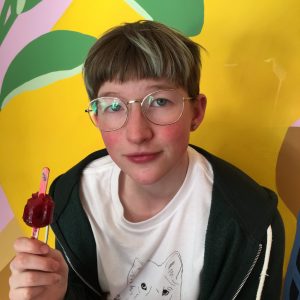 As part of celebrating Foglifter’s recent Pushcart nominees, we interviewed the writers! Our forth is Mattie Ganson, published in Volume 4 Issue 2!

Kelly Link’s Get In Trouble (again).

Like five years ago my creative writing professor was like, write a story about shame, and I was like, over my dead body, but now I’m writing it. It’s about the “sawing a woman in half” magic trick and doing bad things because you want to. We’ll see where it goes.

I can’t write unless I’m actively drinking a beverage.

Working a lot of retail and having amazing writing mentors.

There are a lot of quippy answers to this question but the truth is that I have no idea what role any of us should be playing in this cultural climate. I want to point to Ilya Kaminsky’s poem “We Lived Happily During the War,” as it does a beautiful job of expressing the kind of guilty, inactive existential panic I feel almost all the time. In “What I Know is in the Ocean,” my main thesis is that it’s important to provide care for things even if they can’t necessarily be saved and that’s about as close to an answer as I can get.

Slinging books at Uncharted Books and performatively complaining about the weather.

Mattie Ganson is a zinester, writer, and sales associate living in Chicago. If they’re not wearing at least one item of clothing that could be described as “dumb as fuck” they have to go home and change. They’re on twitter as @mattieleighx.

Foglifter is now closed for submissions—We are always open for cover art!

So excited for contributor @FaylitaHicks for this Lammy finalist nod! We’re rooting for you! 😝