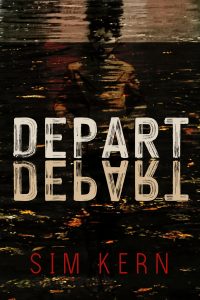 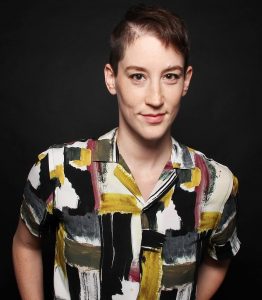 When catastrophe strikes, our agency to determine where we shelter and who we associate with is deeply constrained, and for queer people, this loss of agency can prove dangerous. Sim Kern’s debut novella, Depart, Depart! is a powerful portrayal of how transness complicates survival in the wake of a climate-change-fueled natural disaster.

The novella opens with a cataclysmic hurricane that floods Houston. Noah Mishner is an evacuee from Houston who arrives at the Dallas Mavericks’ arena-turned-emergency shelter, exhausted and unsure how his friends and family fared.

As Noah navigates life as a visibly trans person in an emergency shelter, he is visited by the boy-ghost of his great-grandfather, Abe, who narrowly escaped the Holocaust. With Abe’s visitations come increasingly powerful visions of Nazi-occupied Germany, exposing Noah to the violent oppression of his ancestors. Abe’s ghost forces Noah to reckon with his family’s intergenerational trauma, as well as Noah’s connection to his Jewishness—an identity that is complicated by his queerness.

Abe’s ghost, compellingly wrought by Kern, externalizes Noah’s self-preservation instinct so that he may be in conversation with it. These conversations are the beating heart of the novella, as Noah’s survivor’s guilt is compounded by his ancestor’s. Kern honors self-preservation, but also questions it. They ask, do we truly survive if we leave our connections behind?

As frightening as these visions are, Noah is often more terrified by the everyday horror of being trans in public. Noah, eight months on testosterone, struggles to navigate sleeping arrangements and personal hygiene under the gaze of hegemonic, “capital-T” Texans. Without his supply of medication, Noah’s increasing gender dysphoria creates a heightened sense of fear and vulnerability, which threatens to overwhelm him. For trans readers, these moments may be painfully familiar; for others, they may illuminate the privileges of being cisgender.

While Noah’s queer body makes him a target of bigoted evacuees, he also attracts a found family of similarly displaced queers. Noah shares several touching moments with older queers, a bridging of worldviews that is so valuable and yet so rarely seen in media. David, a middle-aged, gay, Jewish man, acquaints Noah with the traditions his forefathers left behind. And though Noah and Elena, a trans, gen-X Latina, have little other than their transness in common, they stand by each other with a fierce loyalty born out of shared struggle.

Kern, however, does not shy away from in-fighting between queers. In several scenes, the characters debate the safety of drawing attention to their queerness. Elena wants to fly under the radar as much as possible while Malone, a Vietnamese-American, non-binary Zoomer, wants to stand up and demand equitable treatment. Queer readers will be intensely familiar with both voices. Is being visible safe here? Am I doing a disservice by erasing myself? As Elena says, “There are times for pride, and there are times for survival, and this here’s a survival situation.”

Depart, Depart! is a multifaceted gem that brings an intersectional awareness to each character’s specific cultural locations and vulnerabilities. Kern’s voice insists on nuance and does not diminish the difficult realities queer people face in times of crisis. Their writing is vivid, immediate, and devastating at times, but ultimately hopeful. As our climate crisis worsens, Kern’s story is a full-throated shout of warning that raises one hand in protest while the other holds close the familial connections that ground us in times of upheaval.

You can purchase the book from Stelliform Press or IndieBound.org for a list of your independent local bookstores! 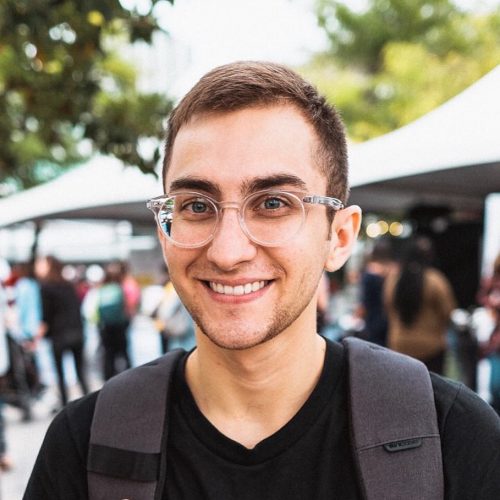 Everett Burge (he/him) is a speculative fiction writer living in Toronto. He loves stories that complicate reductive narratives in order to better understand the breadth and depth of human experience. Keep up with him on Twitter @everett_burge